TOKYO (Japan) – The hype is in overdrive and the wait is just about over.

We don’t need Stephen A Smith or Skip Bayless debating this. There is only one 3×3 GOAT – Dusan Bulut aka ‘Mr Bullutproof’.

The spectacular Serb has more moves than a Mortal Kombat character. None more memorable than when Bulut pulled out the nutmeg between the legs in one of the greatest moves ever.

World Cups, Euro Cups, World Tour Finals – the 35-year-old has achieved everything in 3×3 for his beloved Serbia and Novi Sad.

But there’s one thing left and it’s the biggest prize of them all – Olympic gold.

You bet this 3×3 unicorn will be emptying his bullets for the crowning achievement of his glorious career.

And along the way Bulut’s brilliance – more than anyone – can make the world fall in love with 3×3.

This lethal lefty stuffs the rim so often that he really should have starred in the new Space Jam. Lasmanis has been dominating the World Tour for years and is so dope that he has multiple nicknames.

He’s ‘Flight KLM’ because this dude can soar above the rim like he’s powered by Boeing 787 but he’s ‘Batman’ too for his superhero powers like hitting a step back two to win last year’s Doha Masters.

The 2m (6ft 7in) Lasmanis might be the prototype for the perfect 3×3 player. Blessed with incredible genes – his dad was an Olympic rower for Latvia – he can do it all on the court.

Get too close and Lasmanis will perform a drive by and assault the rim. Give him room and this bad boy will hit you up with a two-piece.

With Olympic blood in his veins, Karlis Lasmanis is made for the biggest show on earth.

For a while, Nauris Miezis was Lasmanis’ loyal sidekick. His partner-in-crime. ‘Robin’, if you will.

But this cold-blooded killer might just deserve top billing having powered to the top of the mountain with Miezis crowned MVP of last year’s World Tour Final.

When the game is on the line, Miezis steps up effortlessly like he’s out for a Sunday walk. It’s almost like he doesn’t feel the pressure that suffocates all other mortals.

Maybe the ‘Terminator’ is a more accurate nickname for this 3×3 robot, who has bailed out Latvia and Riga so many times.

With the lights about to be at its brightest, the calm Nauris Miezis will always make the right play and you just know he’ll hit a Buzzer beater or two in Tokyo.

Belgium have become the surprise packet of 2021 and their sudden rise earned them a shock qualification to the Tokyo Olympics.

The Belgians play beautiful 3×3 and share like they care to create a four-headed monster. Perhaps their most impressive player is young gun Thibaut Vervoort, whose flowing blonde hair makes him a standout on the court.

But his game matches his locks with Vervoort an equal threat on the inside and outside. The 1.96m (6ft 5in) beast can mix it with the big boys down low – just ask Kareem Maddox – but Vervoort also gets wet from beyond the arc.

The 23-year-old is proving impossible to stop and if he fires in Tokyo then Belgium might just punctuate the most incredible 3×3 run imaginable.

Yan Peng received the biggest endorsement of his skills possible two years ago when World Tour heavyweight Liman asked him to replace their injured superstar Stefan Stojacic aka ‘Mr Robot’.

The smooth-mover handled himself well and gained plenty of big game reps in his time with Liman. It should serve the 25-year-old well with Peng the leader of an experienced China who have banked on their talented youngsters to take them to the promised land.

Not even the Great Wall can stop the 1.98m (6ft 6in) Peng from getting to the basket but he can score from almost any spot.

A lot of burden will fall on Peng’s shoulder but this walking bucket should be ready for the challenge.

The 34-year-old has been a long-time samurai for Japan dating back to when he took part in the first FIBA 3×3 World Tour in 2012.

He’s playing better than ever having led 11th seed Aomi to a semi-final berth at the Lipik Challenger in May, where they shocked the world by defeating world No.1 Liman in an overtime thriller.

Ochiai has found his best at the right time. Forget Dennis Rodman, Ochiai is the real ‘worm’ and he has more in his bag than a school kid’s backpack.

While Ochiai provides the veteran leadership, rising star Tominaga is in hot demand and recently signed for a great US Division 1 college in the Nebraska Cornhuskers.

The 20-year-old has already shined on the U23 Nations League and this lefty is deadlier than sake. Not only a flamethrower, he can throw one nasty dime to explode social media faster than a Woj Bomb.

This dynamo is the real deal and will be a national hero if he helps lead host Japan to glory.

Red-hot Netherlands have some new stars but it’s Dimeo van der Horst who is the heartbeat of this new 3×3 power.

He’s been clowning defenders for years on the World Tour for Team Amsterdam and now gets his shot to lead the Dutch Masters to the ultimate prize.

The athletic Dimes is a scoring machine and it’s a wrap when he gets a full head of steam. Like his name suggests, this dude sets up his teammates perfectly like he’s wearing x-ray glasses.

The 30-year-old has been a trooper for Dutch 3×3 for years and now gets to be the centerpiece of a team with genuine ambitions.

Led by their star, the men in orange will have only one color in their sights in Tokyo – gold.

No one deserves to be at the Olympics more than Michael Hicks aka ‘Money in the bank’. The Pole is straight out cash when it comes to entertainment and worth every penny.

He singlehandedly led Poland to an upset over mighty Serbia and bronze at the FIBA 3×3 World Cup 2019 in a Mt Rushmore level 3×3 performance.

Adding to his legend, Hicks played through an injured middle finger to his shooting hand to inspire Poland’s Olympic qualification in Graz.

He’s a one-man tour de force and a flat out winner who won’t stop until he’s broke.

This Russian doesn’t play like he’s rushing. Karpenkov’s stronger than a shot of vodka and immoveable in the post where he repeatedly bullies smaller defenders.

The 2.04m (6ft8in) beast is part of a young talented core who have led Russia’s 3×3 rise and he might be the very best of the bunch.

The 24-year-old has tasted sweet success for his country at FIBA 3×3 U23 World Cup 2019, where he was the second leading scorer overall.

He will arrive in Tokyo in hot form having starred in Russia’s domestic league and this hulk looms as one of the most intimidating players at the Olympics. 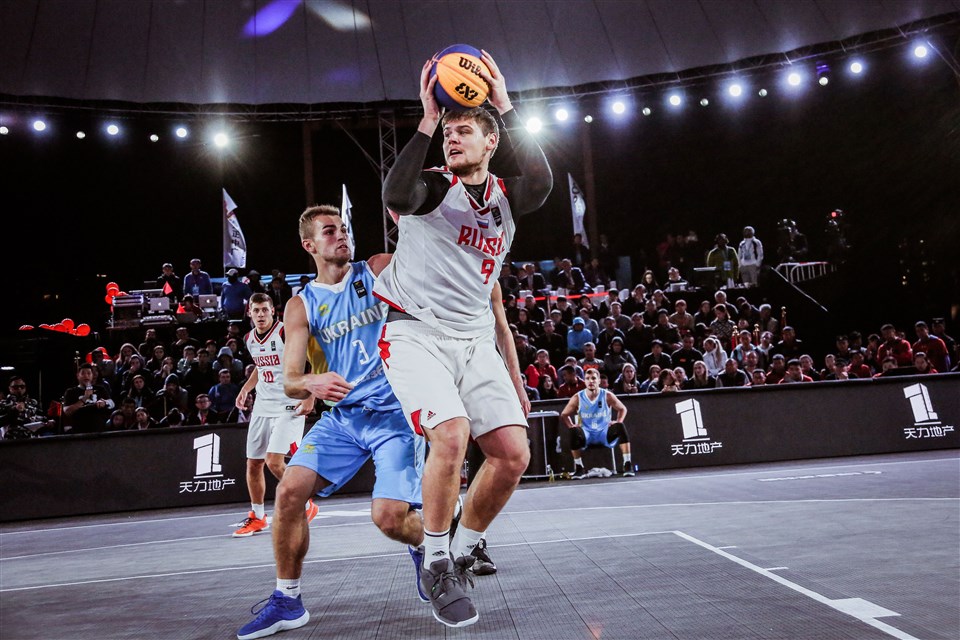