TOKYO (Japan) – There were legendary performances galore during an absolutely epic 3×3 debut at the Olympics, so let’s take a closer look at the stats that mattered.

That’s right: none of the teams competing in Tokyo, not even the Olympic champions won all their games in Japan. Both USA’s women and Serbia’s men only lost one in nine games (the former against Japan, the latter in the semi-finals against the Russian Olympic Committee [ROC]). Even more incredible: Latvia won gold despite losing 3 games in the pool stage (Belgium and then Serbia and ROC on the same day). This shows how unpredictable this game is. Anything can happen in 10 minutes on the 3×3 court.

To our point about drama around in 3×3, over a quarter of the games were decided by just 1 basket (2 points or less). In total, 18 of the 68 games went down to the wire. Japan’s men for example started the tournament with two overtime games. And this stat doesn’t even include absolute nail-biting games like the men’s final against Latvia and ROC, which was a one-point affair before Karlis Lasmanis hit the two-point shot of his life to make it a 21-18 three-point win.

The towering Jinqiu Hu was arguably the breakout star in Tokyo with the 23-year-old way ahead in points per game (9.3) with second best Karlis Lasmanis averaging 7.6. His tally received a healthy boost thanks to an insane 17 of his team’s 18 points against the Netherlands in a 3×3 Olympic record that will take some beating. He also edged Lasmanis in player value with 70.5. The 2.10m (6ft 11in) man mountain is almost impossible to shift in the paint and looms as a central figure in China’s men’s team taking the next step and becoming a 3×3 power.

You’ll hear talk a lot about Kelsey Plum but the 26-year-old Allisha Gray actually topped all athletes in Tokyo in player value (and by a significant margin: 7.7 vs. 6.6 for the second in the ranking Stephanie Mawuli from Japan). The player value for those who are not keeping up is the metric we use in 3×3 to measure the statistical performance of each individual player (comparable to “efficiency” in basketball).

The one stat line that truly encapsulates Gray’s contribution is the 9 rebounds, 8 points and 6 highlights (3 blocks, 2 drives and 1 key assist) that she dropped on ROC in the pool stage. When we say this performance was unique, this isn’t a gimmick. There was only one triple five in the women’s category in the entire tournament! It happened 9 times in the men’s category. Ira Brown (Japan) is the only player who did it twice.

This Belgian sniper turned up the heat in Tokyo with clutch shooting to cement himself as one of the best in the business when the game is on the line.

The 23-year-old won games off his hot hand with incredible two-piece buzzer beaters against Latvia, Netherlands and Poland, which knocked out the FIBA 3×3 World Cup 2019 bronze medalists at the pool stage.

His game-winners increased in difficulty for a player who has nerves of steel when the stakes are highest.

There were 11 buzzer beaters across both men’s and women’s with Vervoort amazingly accounting for three of them.

We had some great shooters in Tokyo. We just mentioned Vervoort, who hit the most two’s (17) in Tokyo. Both Kirill Pisklov (ROC) and Dusan Bulut (Serbia) shot 42% from outside the arc (reminder: we’re playing a super fast-paced game with no breaks, outdoors with sun and wind). But the best shooting percentage from long range was to be found in the women’s category with Yulia Kozik going 15 for 35 (43%) from downtown. Interestingly she buried at least one shot from behind the arc in each one of the nine games she played in Tokyo. Not bad for the 24-year-old who previously shined in the U23 category. 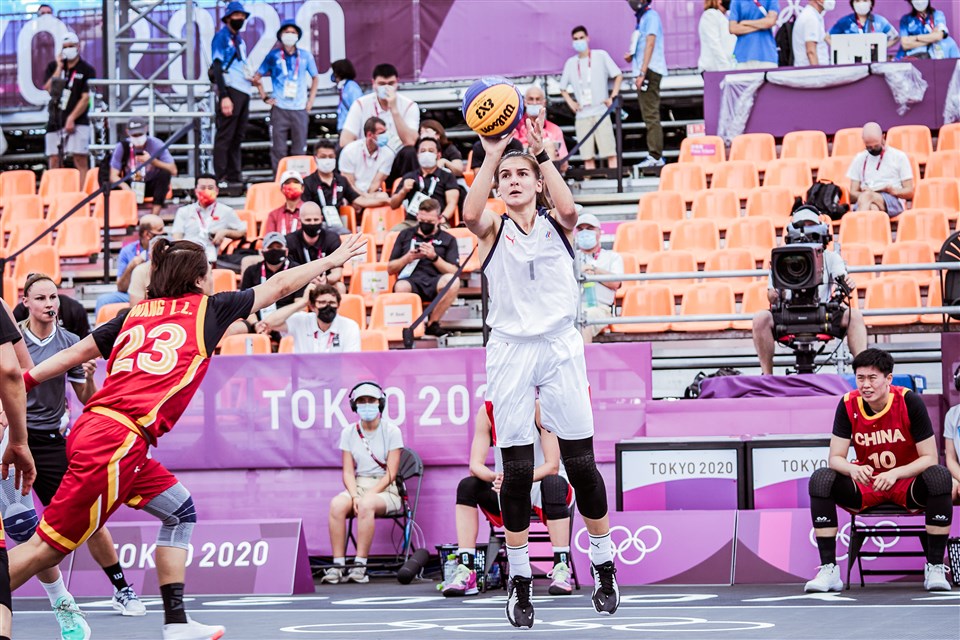 If you thought this game went by in a blur then you would be right with Latvia winning with over three minutes left.

This was one of the highest standard games of the whole competition with both teams absolutely shooting the lights out.

Japan were a perfect 7-of-7 from inside the arc and 5-of-11 from two. That kind of display should win most games but Latvia were just as they shot 12-of-15 from one and 3-of-6 from two.

Latvia’s bigger bodies and domination of the boards proved the difference in a game where they survived a big scare.

🇱🇻 @basketbols book a semi-final date with @belgianlions at #Tokyo2020 #3×3 after knocking out the hosts @JBA3x3Official in a close quarter-final clash! pic.twitter.com/clb4eSHs60