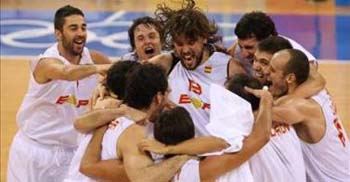 Although Lithuania started the game with zone defense Spain’s Pau Gasol had too many moves for Lithuania to contest. He caused two fouls within 5 minutes for Lithuanias Javtokas. This opened up the inside play and gave Spain an inside edge. Also, Rudy Fernandez played big for Spain shooting and slashing inside while keeping his cool in the final quarter to make important free throws.

This win marks the first time after 24 years that Spain has advanced to the Olympic Finals where they played last in the 1984 Olympics in Los Angeles. Top scorers for Spain was Pau Gasol and Rudy Fernandez although it was a well fought out team effort. Spain will have to play big in the Olympic Basketball Finals when they face Team USA who beat Argentina by 20pts. In the first meeting, Spain vs USA the Americans dominated and won by plenty. Spain will look for revenge and show a give more competition for the Finals.