JAKARTA (Indonesia) – Brandon Jawato is an all-around talent. He put that on display while flirting with a triple-double in his Indonesia national team debut back in November.

I love it how we’re the underdogs. I’ve been an underdog my whole life and I feel like we’re out to prove a lot of people wrong. 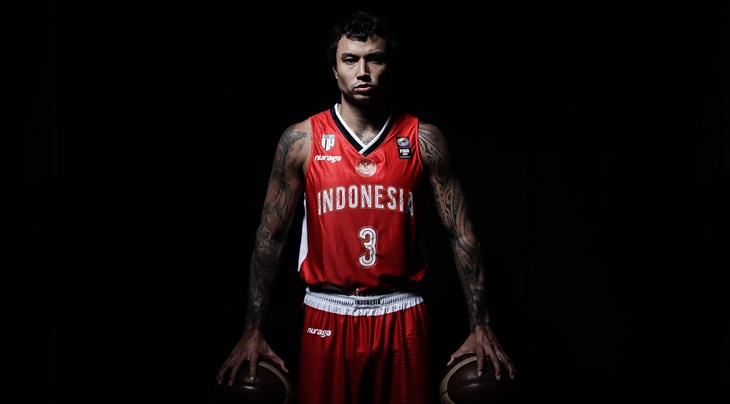 However, even with a vast variety of tricks which he can choose from to take over games, Jawato is fond of one skill in particular.

“The most important skill in my game is shooting,” he said in a recent interview with FIBA Media. “Definitely shooting. I feel like I can shoot from anywhere on the floor. Whether it”s contested, whether it’s an open shot.”

“I’ve always been a shooter all my life. I know that’ll never leave my game, my shooting ability.”

Sharpshooters hone their craft through their childhood in different ways. For Jawato, his marksmanship was developed by practicing under unique conditions with his father.

The 1.93M (6’4″) small forward grew up “in a village” in the beautiful island of Bali and would sharpen his shot on a makeshift basket placed by his father.

“He put the rim in the kitchen,” Jawato recalled. “We had like a separate section of my grandma’s kitchen that she would cook in and he’d put the rim up like right near the roof.”

So in that kitchen, while his Grandmother was fixing meals for young Brandon, he was also learning to “cook” on the court.

Though it was technically Grandmama’s kitchen that was being used, the family member that has the most influence on Jawato’s basketball career was his father.

“Growing up, he built a basketball court in this little alley in our house in Bali. It was like on a dirt road. I don’t think the rim was regulation, but ever since then I fell in love with the game,” Jawato said.

Aside from building a field of dreams, Jawato’s father would also find ways to push young Brandon to be better.

“I’d play him 1-on-1. He’d always criticize me on my game. We would argue, but if it wasn’t for my dad, I don’t think I’d be playing basketball here in Indonesia. My dad was more into surfing but he loved the game of basketball so he would always dedicate his time to teach me.”

It’s most likely that the elder Jawato might not be as keen to betting against his son’s shooting abilities these days, especially on a regulated court.

Brandon Jawato walked onto the court at the Khalifa Sports City in Manama, Bahrain. Jawato has been a professional basketball player at a high level for many years and has played on many courts in many different tournaments, but this one was different.

“My first time running out in the Indonesia jersey, I felt really honored,” he said of the first moment in his national team debut. 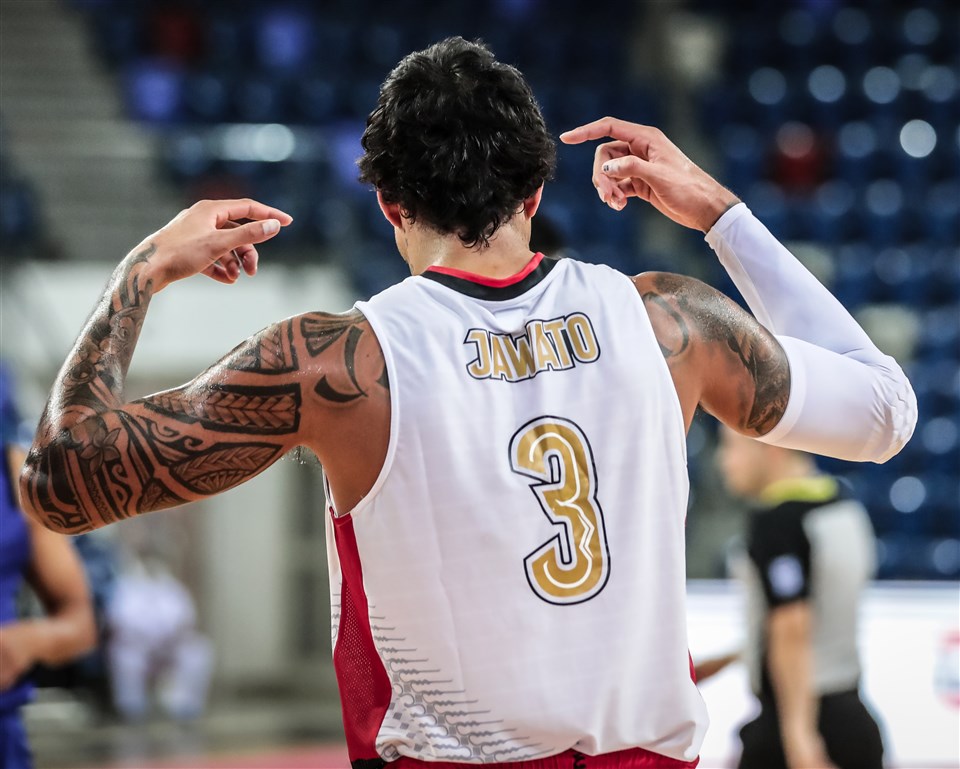 “It’s been a dream of mine to represent a country that my father’s from and represent Indonesia with pride. I felt like I had left a lot of blood, sweat, and tears on the floor and I’ve been practicing a whole bunch. I felt really honored and ready to let the whole world know about Indonesia.”

Jawato didn’t wait to show off his shooting skills that he’s proud of, finishing with 22 points with 3 three-pointers and no free-throws missed in 7 attempts. More impressively was his overall skill set that led him to putting up 8 assists, 8 rebounds, and a steal.

“I always love getting my teammates involved with whatever I do, like the great hustle and energy. Coach talks a lot about my energy. He told me that he’s never coached anyone that matched my energy and I’ve noticed that on any team I’ve played, I’m really energetic. I try to leave everything out on the floor every time I play, no mercy.”

That first game wasn’t easy for Jawato and the team. Thailand never backed down and even held a lead as big as 11 in the first half.

“I saw that we were down and something just ticked in my mind,” Jawato said. “I was like ‘Bro what are you doing?’.”

Indonesia started rallying from there before running away with the lead towards the fourth quarter, but again – it didn’t not come without obstacles to overcome.

“…I actually started cramping,” Jawato said of the second half.

“I kid you not, I looked over to my trainer and I’m like my legs are like shot and completely cramping. I don’t know what’s going on, my body’s not adjusted, the gyms cold. That’s when I started distributing and passing.” 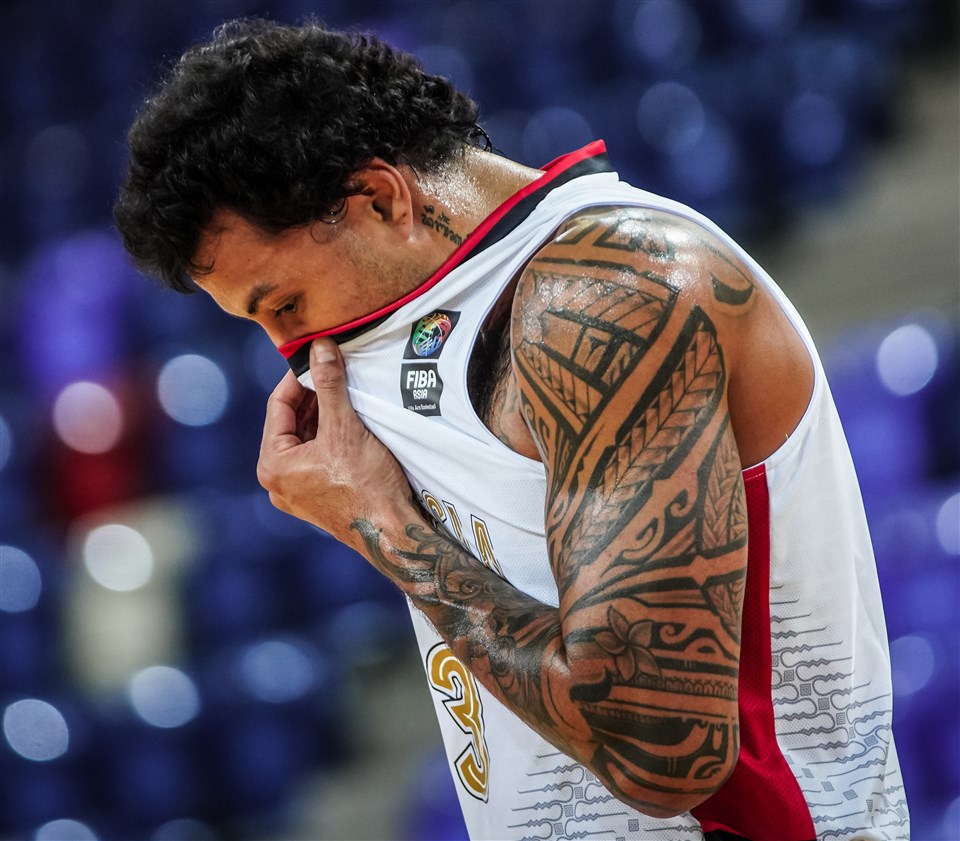 “I was like ‘You know what? I’m out on the floor and if I’m not able to play my game and get to my certain spots and score, then I need to pass the ball’.”

That’s the beauty of having a versatile player like Jawato on the squad, being able to get other players involved when he can get things going by himself.

And that’s definitely is a part of coach Rajko Toroman’s game plan.

“I definitely like to play on the wings and on the top of the key, but coach Toro has me in a position that I’ve played ever before. I’m actually playing the 4. I’m actually the guy setting the screens.”

“Playing basketball in LA and in college, I was always the 2-3 guard. I’m completely out of position in Toro’s offense, but you know what? I want other teams and the scouts to see that I’m versatile. I can play any position. I can fit into any type of offense. So if coach wants me to play the 4 and set screens for the guard, I’ll do that, but that’s not my natural position. I’m the guy that likes to handle the ball and the one that likes to come off the screen and do my thing. But for the betterment of the team, if coach wants me to set screens, rebound, be a facilitator, then I’ll do that.”

“I don’t mind it as long as we’re winning and as long as I get the other guys the ball and involved, then I’m good and I’m following coach’s game plan. I’m like ‘I got you coach, whatever you tell me to do I’m going to do it.”

It’s only been one game with “Timnas” – the Indonesia national team – for Jawato so far in the FIBA Asia Cup 2021 Qualifiers, but his play has helped brightened what was already a bright future for basketball in the country.

They’ll be facing Korea (“they completely shoot the !@#$ out of the ball, oh my gosh”) in the upcoming final window of the Qualifiers later in June and Jawato feels that will be another good stage to showcase how good Indonesia can be.

“I’m looking forward to compete with them and that’s what it’s all about at the end of the day. Everyone is evolving a lot and there is of growth in between these countries. We’ll give them a good game and compete with them.”

Jawato is looking even further into the future than that upcoming matchup, especially with Indonesia hosting Asia Cup 2021 later this year.

“I believe that we can achieve a lot together,” he said. “Lately there’s been a lot of growth within our team within our organization and it just comes down to persistency. Day in and day out dedicating our entire lives to the game of basketball whether it is in the gym working out our bodies, whether it’s on the practice floor, practicing, getting up extra shots, or in the film room watching film.”

“I feel like we have a lot to prove other countries. I love it how we’re the underdogs. I’ve been an underdog my whole life and I feel like we’re out to prove a lot of people wrong. I feel like we can be up there with the Philippines and with Korea and we can be up there with the teams up there in the Asia Cup. It’s just a matter of how bad we want it and a matter of competing every second and every play of the game. I feel that it’s going to be good, I’m confident in my team, and we’re going to continue to work every day with coach Toro.”

Schedule confirmed for final phase of the FIBA…