NEW DEHLI (India) – Anitha Pauldurai is a legend. This was re-confirmed earlier in the year when she was awarded the Padma Shri award, one of the highest civilian honors that can be received in India.

Considering everything that she has achieved with and for India basketball, however, this should not come as a surprise.

“It was a dream-come-true moment when I wore the India national team jersey for the first time in my life and those feelings can’t be explained exactly by words. There was a sense of satisfaction and emotion when I first played for the national team,” Pauldurai told FIBA.basketball.

“I always felt as a huge honor to lead the country.” 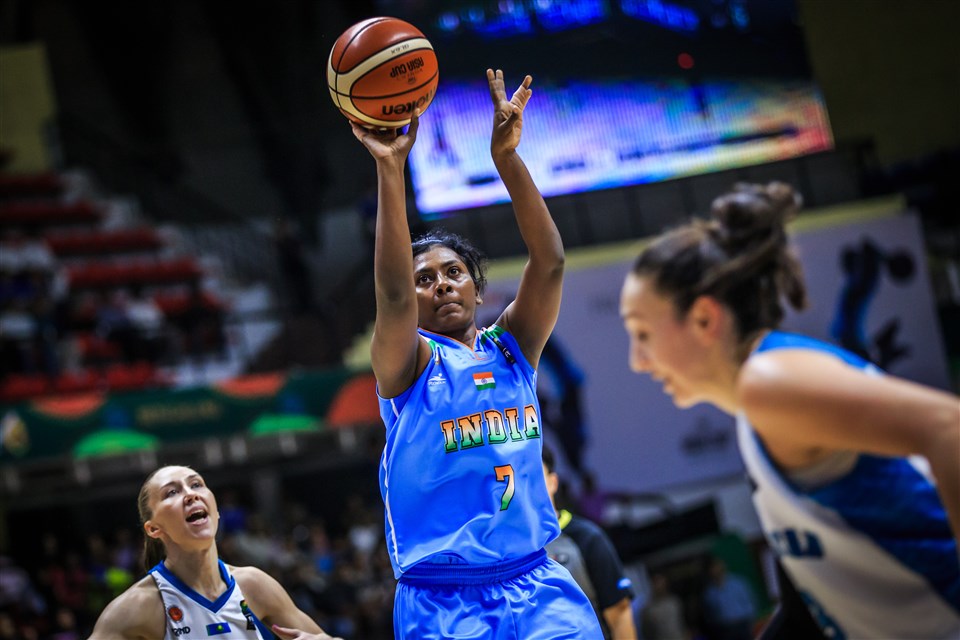 She was only midway through her teens back in 2001 when she made her national team debut. Pauldurai made sure to quickly prove herself worthy of these early opportunities and was named the national team a couple of years later when she was 19, making her the young national team captain in India women’s basketball history.

“I was made national team captain at a very early stage in my career when I was 19 years old with all the seniors present in the team. I was really nervous in the beginning, to be frank, but the trust they had in me actually triggered me to give my best. Inside the court – each time I stepped in – I always want to lead by example and lead from the frontline. So the captainship and the trust people showed in me had a very positive influence on my game and on my mind.”

The Tamil Nadu native was consistently a threat to score in double-digits in Women’s Asia Cup play, aside from being the team’s true leader. After nearly two decades with the national team, Pauldurai’s talents and leadership helped India succeed on the court time and again.

But all of this only scratches the surface of why Pauldurai means so much to the women’s basketball scene in India.

After the Women’s Asia Cup in 2015, Pauldurai took a maternity break and started a family. It’s always a tough decision for an athlete/competitor to take such a break at their physical prime, but it’s a decision that Pauldurai boldly made, thankfully, with the support from her loved ones.

“In our Indian society, as a professional woman player, it’s really tough to maintain the balance between family and career as our elders are still in the conservative mindset,” she admitted.

“Luckily for me, my husband, in-laws, and my parents were so supportive of my career and passion towards basketball which helped me to achieve my goals and chase my dreams even after marriage especially after my maternity period.”

That’s right. After Pauldurai had her baby, it didn’t take too much time for her to get back on the court. At the Women’s Asia Cup 2017 Division B in Bengaluru, the proud captain was back on the court for India once again.

It was an emotional tournament for Pauldurai, whether it was being able to play on home soil and in front of her young child. To be able to gain promotion to Division A after an exhilarating win over Kazakhstan in the Final made it all even better. 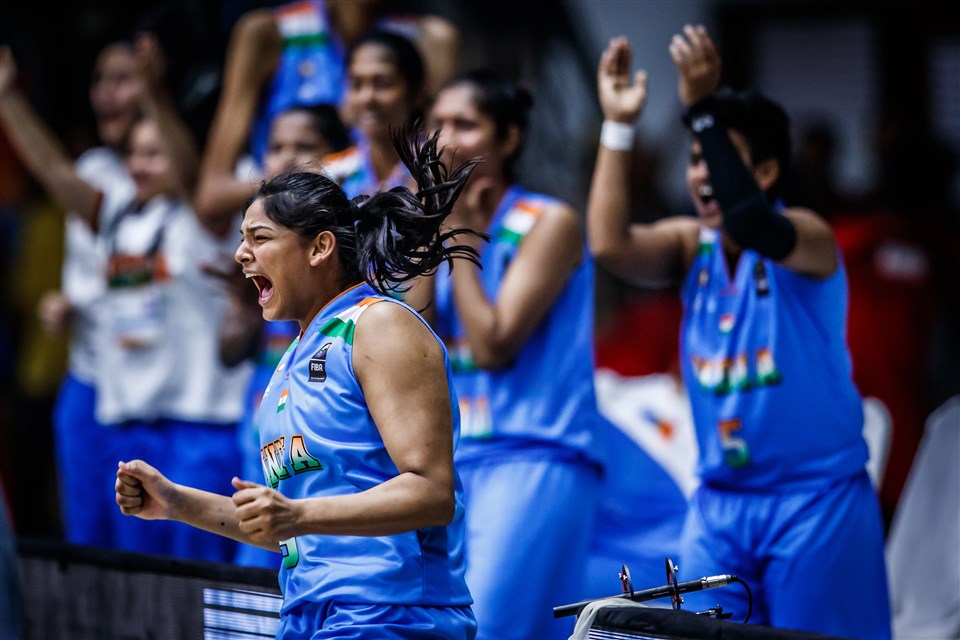 “Huge credit should go to my husband and my family members for supporting me to achieve my goals. My Pure love for the game and undiminished burning passion towards my goals in basketball allowed me to come back even stronger physically and mentally after my maternity break. It was totally a different feeling playing in the highest level in front of your own son and I totally enjoyed it inside the court.”

Pauldurai retired from national team play shortly after that, but her path in the basketball world was far from over. Only a couple months later after her last Women’s Asia Cup appearance, Pauldurai was back in action again. This time however, it was on the sidelines as an assistant coach of the U16 Women’s Asia Championship 2017 Division B which was also played in India.

Once again, Pauldurai was able to inspire the young team to a title and promotion to Division A. 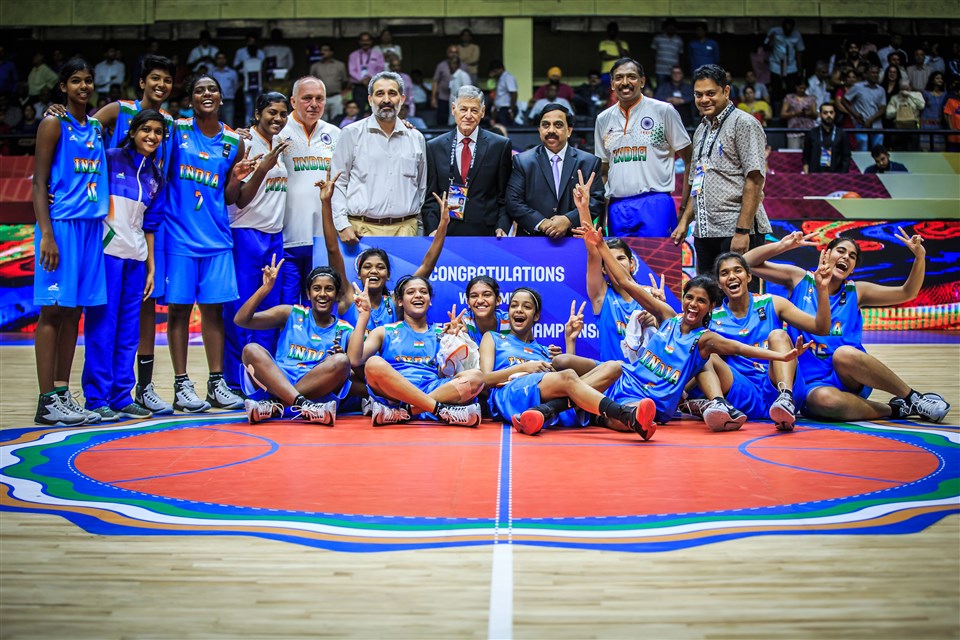 “Having played almost two decades for the national team, in my tail end of my career, I was handing the players from inside the court. All the juniors listened to my instructions inside the court while playing already, so the leadership started to develop automatically from there,” she said of her smooth transition from player to coach.

“The advantage one has of a long international career is that we tend to have played and worked under so many different types of coaches so the experience I gained from them all was very useful while I took up coaching. The transformation from player to coach was really easy for me because of the vast experience and knowledge I gained playing all these years and working with several national and foreign coaches during my time as a player.”

It made it so much easier just being a former player of legendary status as Pauldurai was when she started coaching the young girls in that team. After two decades of being a featured face of women’s basketball in India, she had so much to teach and the youngsters were more than willing to learn.

“I always love sharing my experiences to juniors and young players,” she said. “I used to interact a lot with all the juniors during the national team camps as it is immense happiness for me to see young up-and-coming players do well and prove their potential.”

“Having had a long career of almost 20 years, you tend to be idolized by many young players who are just starting to play the game so I felt it was a huge responsibility of mine to set a benchmark both on and off the court for the budding young players who look upon you. I always tell youngsters about the process of self-betterment in the game and on one’s personality.”

Women’s basketball in India is gradually on the rise. Maybe it started as Pauldurai ascended into her prime. Maybe been her role as a coach in the junior level that has helped boost the development forward. Whatever the case, there’s no denying that she’s been a huge part of the progress.

However, there’s still plenty of more work to do, she claims.

“We are improving a lot when it’s comes to women’s basketball over the last two decades as we are now one of the tough competitors in Women’s Asia Cup level, but the truth of the fact is that we are still lacking behind the the other basketball powerhouses like China and Japan.”

“Surely, we have come a long way in the rankings in the recent years, but there’s still a lot of improvement needed. The need of the hour is for a national professional league which will give lots of exposure for our Indian players by mixing them along with foreign players. We have a good infrastructure these days in India, so I am sure women’s basketball in India is on the right path, The Basketball Federation of India (BFI) is working really hard for the development of the game and for the welfare of the players. It won’t be too long before Indian woman’s basketball will become one of the powerhouse among Women’s Asia Cup teams.”

“We have some very talented players in the current National team like Shireen. Then we have a few others who work really hard and are very skillful. Going to the young generation like Sanjana Ramesh ad Honey who are right now playing in the US, they should bring a lot of exposure to India basketball when they join the India national team squad. The NBA academy in India is doing a great job by picking up these talents and giving them the perfectly needed exposure and experience in international standards.”

“My best wishes for all the young hoopsters to shine as brightly as they can and bring many laurels to our country.”